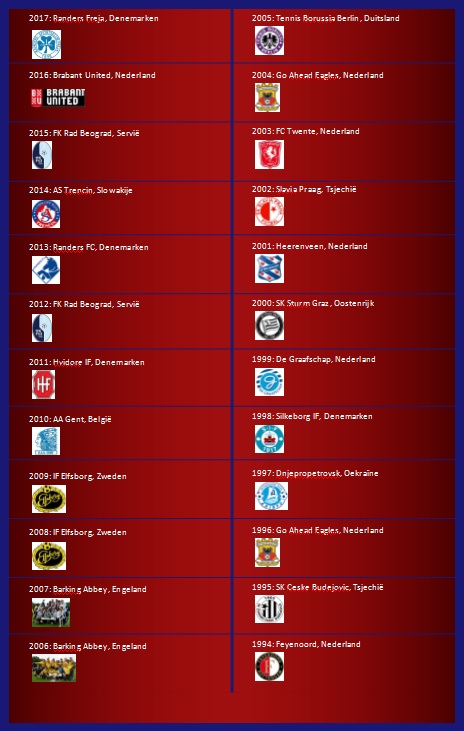 In 1994 the former Boekelo football Club VV Unisson, organized on the occasion of its 75th anniversary, the first international youth tournament for footballplayers U17 at “Het Unicum” in Boekelo.

During the first five editions, from 1994 – 1998, we had teams from 11 countries visiting our tournament on “The Unicum accommodation”. Besides Dutch toppers such as Feyenoord, Sparta R, FC Twente, Heerenveen and Go Ahead, there were teams from Belgium, Germany, Sweden, Denmark, Austria, Poland, Czech Republic, Spain, Turkey and even the Ukraine to admire. Famous was the 52 hours bus trip that FC Dnjpr Dnjpropetrovsk had to make in order to play football in Boekelo for 3 days.

In the next five years, from 1999 to 2003, we had teams at our tournament from new countries such as Hungary, Croatia, Lithuania, and Slovakia, visiting our tournament. In 2002 the 2 clubs from Boekelo, BSC and VV Unisson merged and from that time on the tournament was organized by BSC Unisson.

In the period 2004 – 2008 there were teams in Boekelo, for the first time, from England and the notorious Dinamo Kiev was one of the participating teams in 2004. Remarkable is the participation of FC Cukaricki Stankom in 2006. Announced as a club from Serbia-Montenegro but, because of the independancy of Montenegro on the first day of our tournament on june 3, suddenly from Serbia.

In the period 2009 – 2013 a team from Serbia visited our tournament. Rad Beograd won our tournament in 2012 as newcomer. In 2008 BSC Unisson moved to “De Grobbe” at the Oude Deldenerweg in Boekelo, the accommodation of former BSC. From 2009 on the tournament is played at “De Grobbe”.

The teams who visited our tournament most, were besides BSC Unisson itself, Silkeborg IF from Denmark, FC Twente, Heracles and Sparta R from the Netherlands, Tennis Borussia Berlin from Germany and IF Elfsborg from Sweden.

In 2014, during the 21th edition, we had with champion Ludogorets from Bulgaria for the first time a Bulgarian team visiting Boekelo. Also the last tournament that is played on De Grobbe. From 2015 on, the tournament is held on our brand new accommodation De Zweede.

In 2016, the tournament was already held for the second time on the brand new accommodation De Zweede in Boekelo. Three teams were for the first time in Boekelo. Two of them were playing in the final. At the end the Dutch team of Brabant United (the second team in the history of the tournament that won all their 6 matches) beatet the Danish B.93 Copenhagen.

In 2017 NK Lokomotiva Zagreb from Croatia and Helsinki FA from Finland makes their debut. The Croatians were beaten in the final by Randers Freja from Denmark, that won our tournament for the second time after 2013.

During the dozens of editions , our tournament had some illustrious winners, such as Feyenoord Rotterdam during the first edition in 1994, FC Djnepr Dnipropetrovsk from the Ukraine in 1997, Sturm Graz from Austria in 2000, Slavia Prague from the Czech Republic in 2002, AA Gent from Belgium in 2010 and AS Trencin from Slovakia in 2014.

Not anly famous teams visited our tournament during the 20 editions, but also famous players showed their talents in Boekelo and some of them were even elected for their National teams.